Posted on March 31, 2018 by strangegirlgaming 8 comments

I have many posts in mind for Far Cry 5 now that I have finished my journey through Hope County, but what better way to start than by discussing the newest addition Far Crys hall of Infamy, the Father, Joseph Seed. Ever since his announcement last year I knew he was going to be a complete nut case, he looked positively insane and trust me when I say he more than lived up to my expectations. I will give a SPOILER ALERT here, for I will be discussing end game events and you may not have finished the game yet.

A mad power hungry and ruthless man who thinks he is a prophet, chosen by god who thinks the entire county needs to be cleansed and atone for their sins was always going to make for an interesting and different villain to what we have seen in the series before. Joseph is the leader of the cult terrorising Hope County know as “Project at Edens Gate” and trust me when I say this cult is filled with a bunch people just as crazy as The Father. There are two ways in which people find themselves to be part of his cult, either through Coercion or violence, should you continue to resist you could find yourself six feet under. This is a doomsday cult that takes oppression to the next level and that is thanks to their leader, you will atone for your sins and the entire county needs to be cleansed.

He appears to be a calm and calculated individual, which he is, at least until we begin to not only help the resistance in fighting back against the cult, we take down his Heralds who just so happen to be his siblings. With the death of each sibling we witness joseph become increasingly unhinged, increasingly angry, he is slowly snapping each time you take someone from him. We meet him several times throughout the game when we find ourselves in the clutches of one of his Heralds, he had plenty of opportunities to kill us, something his younger brother John was so keen on doing, yet Joseph wouldn’t let him, he believed that we were not beyond salvation, we could still atone for our sin, John Believed our sin to be wrath but perhaps it wasn’t that after all, The Father certainly thinks our sin to be different by the end of the game.

Joseph Seed seemingly became the mad “Prophet” upon the death of his wife, when we are being held captive by the eldest Seed brother known as Jacob we find ourselves face to face with The Father and he has a story to share with us. His pregnant wife had an accident, passing away she left him with only their infant daughter who was “a pink bundle filled with tubes” that was handed to him at the hospital, it was in that moment that he thinks god spoke to him, telling him about the end of the world and that he needed to start Edens Gate. A young child would only prove to be a hindrance to Joseph thus resulting in him pinching the tubes attached to his daughter, killing her. This act alone should tell you how sick and sadistic Joseph became, the man murdered his own child to start a religious cult, she was his first victim and many more were to follow. 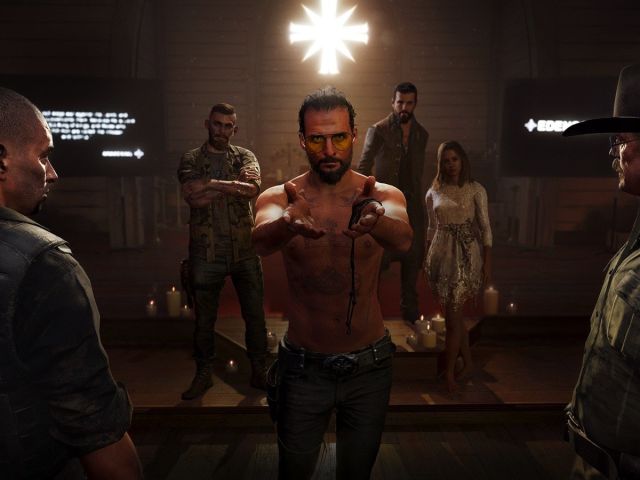 I will give some credit to Joseph, despite all that we have taken from him, he is still willing to let us walk away. We are granted a choice in the end, to walk or resist. I have taken both options though initially I did choose to walk, enough was enough. He believes in his religion enough to still have a peaceful solution, we may walk away with the Sheriff and other deputies, but we must leave his flock behind (your friends and guns for hire), he declares “forgive and you shall be forgiven”. A peaceful ending to your dealings with the father, there is more to it of course which I will be discussing another time. But this shows there is some compassion in Joseph, he truly does believe he is chosen, it isn’t an act. But that doesn’t take away all the dreadful deeds he, his heralds and his cult have committed, but the man does quite clearly have morals, something that makes him considerably different to the likes of Vaas, the secondary antagonist of Far cry 3 loved to torture and torment the player whereas Joseph gives us the option to walk away twice and even stops his younger sibling from killing us outright.

Personally, I find myself actually loving The father, I think he is a great primary antagonist, I like that we must take down his three heralds to force him into a final confrontation. I like that there is a story behind Joseph an explanation of sorts for why he is who he is. His blatant want for power and ruthless nature certainly put him near the top of the pile for formidable Far Cry foes. Fun fact for you, did you know that Joseph Seed is the only Far Cry antagonist to survive the events of the game no matter what? I found that to be quite interesting.

I thoroughly enjoyed my experience with this game and will be back with a full game review soon, did you enjoy the newest instalment to the series?