If you are looking for a tragic story within the dark and gothic world of Bloodborne then look no further than the first mandatory boss of the game. Father Gascoigne has almost a tear jerking story surrounding him, with some interesting lore to keep him in your mind as you progress through the game.

Let’s begin by stating the obvious Gascoigne is not local to Yarnham. Just like us he came from a foreign land and if I had to guess I would say he came to Yarnham looking to receive the blood treatment, I can’t see why else he would have travelled there. I don’t think anyone would make a journey just take part in the hunt unless Gascoigne saw this as his purpose, maybe he did see what the healing church was doing, perhaps he believed he should be part of it. The reason we know he isn’t actually from Yarnham is that he has the title of father, this title doesn’t actually exist within the healing church.

Father Gascoigne was a black garbed hunter for the healing church. Black garbed church hunters were responsible for killing anybody infected with the scourge, they inspired fear, they could declare you infected, they could take your life. In perhaps a cruel twist of fate the clerics of the healing church made the most despicable beasts (Ludwig, Lawrence), what they fought to contain they became the worst off. This was no exception for Father Gascoigne, you will understand why shortly.

Gascoigne was a hunter for the healing church, a black church hunter to be exact, an extremely powerful one at that he was part of an unstoppable team alongside Henryk, they survived many hunts together with Henryk leading a tragically long life. Can’t help but wonder just how long his partner lived for to make it tragically long. Gascoigne fell in love with a woman outside the ranks of the healing church named Viola. He married this woman who had stolen his heart and she gave him two daughters, with a family to think about Gascoigne left the healing church. Perhaps having a family had given him a new purpose, hunting beasts for the church simply didn’t compare to being there with his family. Gascoigne made a choice, though make no mistake he never gave up the hunt.

When we are on our hunt we encounter a young girl waiting in her home for the return of both her parents, with her mother having left to find her father who was out on the hunt. We discover that the mother wears a red jewelled broach, this is important to us. This description gives us the means of finding this young girls mother. If we can find her mother with any luck we will find her father too, we hope that he is a sane hunter, we hope that he still sees the clear line between being a man and being a beast.

We find Gascoigne surrounded by many dead people, chopping them up with his hunters’ axe, perhaps many Yarnhamites attacked him due to him still wearing the black garb of his church hunter days for they yell “Death to the Minister” should they see you wearing the garbs of the healing church. I think they picked a fight, a fight that tipped Gascoigne of the edge. I think he was resting on the line of man and beast but being attacked by a horde of Yarnhamites lead him to give in to his thirst for blood. We find a deceased woman laying on a nearby roof top, when we reach her we discover that she is indeed wearing the red jewelled broach as described by the little girl. We have found her mother, dead for she forgot to take with her a very special object. A music box to remind

her husband of who he is, to bring him home, to not let him become consumed by the hunt. Without the music box Viola had no chance, Gascoigne forgot his family, he lost his sanity, he gave into the beastly urges

The music box contains Gascoignes favourite song, should you use it during the fight he will recoil in agony as it reminds him of his wife, his children, his purpose. It reminds of how far he has fallen and that there is no way back. Unfortunately, upon encountering Gascoigne he is too far gone, he has given into his thirst for blood. We do what we as a sane hunter must. We put the beast down, we give Gascoigne the peace the once great hunter deserves.

We return to the little girl, if you have a heart like me you might have struggled to reveal the fate of her parents so you tell her to go to Oedon chapel. After all there are several people we can send to that safe haven, a young girl will be better off there than waiting out the night alone in her empty house. However, what is already a tragic tale takes an even more sinister turn as she doesn’t make it to Oedon chapel, she makes it so far, to the tunnel just a minute away from salvation. She encounters the man-eating boar, unfortunately what is a young girl to do against such a beast? She is eaten, later if you return to the tunnel and defeat the boar you will find her white ribbon bloodied indicating here fate.

If that isn’t enough to make you feel guilty someone returns home for the little girl, remember I mentioned Gascoigne had two daughters, the oldest one returned for her sister and we are now given the grisly task of handing her a ribbon, showing her that she no longer has a little sister. Instead this girl is all alone, not able to cope with all the loss she has endured on this night of the hunt she throws herself of a ledge, killing herself, ending her grief. Effectively ending the line of Gascoigne, I told you it was a tragic story, this lore surrounding Father Gascoigne is sad beyond belief and it is so well done. One last thing that is quite interesting about Gascoigne is if you really listen at the end of the fight with him it sounds like he is asking for forgiveness, a fitting end for the once capable husband, father and hunter.

Perhaps in another hunt you missed the little girl, never hearing about her mother with the red jewelled broach, you never tell her to leave the safety of her home and her older sister comes back to her, where they can wait out the rest of the hunt together.

Now we have his horribly sad story out of the way I can talk about his boss fight. Gascoigne is the first mandatory fight of the game and boy is he a tough one, he isn’t an easy-going introduction to what we can expect from bloodborne, no he is the perfect introduction, he is so bloody hard that many players didn’t get to experience bloodborne because he made them throw their disc out the bloody window! He was a taster for what was to come and if you couldn’t hack it then you would have no hope when diving further into Yarnham. Gascoigne is a three-phase fight, the first phase he utilises a blunderbuss and hunters axe. It is a good introduction to how you will want to handle many hunters you will be facing further into this nightmare.

The second phase has him switch is hunters axe to it full length giving him a further reach and a few added moves with the potential to land some nasty combos. If you were not utilising the graves to put some distance between you before then you might want to consider that to neutralise his increased reach. Trust me using the graves makes the first two phases of this fight that much easier if you are new to Bloodborne because no amount of Dark Souls is going to prepare you for what it takes to be a hunter.

The final phase is a full-blown beast Gascoigne. He has officially given into the beast within him which is quite sad to see once you know his story, upon your first encounter with him you will be able to decipher through item descriptions that he is the little girls’ dad because of the music box, of course Viola helps to put the early story together quite well but the further in the game you get the further you can dive into his story, anyway back to the fight. He is very erratic and he hits hard, if you were using the graves before they have just become obsolete, he will simply charge through them in his beast form. If you are able to hit him with a Molotov cocktail it will deal decent damage especially if you can hit him with an oil urn first. Though his manic movements do make it quite tricky to land any items you may choose to throw at him 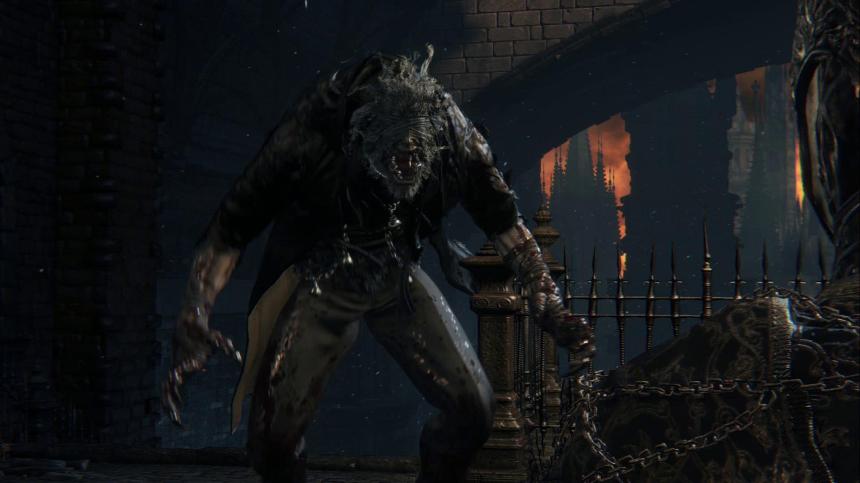 His fight is the perfect opportunity to take advantage of the health regen system, you have a time gap after being hit where if you return the damage you can regain your health as all Bloodborne players know. I would say that all hunter battles are a good time to utilise that mechanic. It also teaches you to be aware of your surroundings to keep some distance between you and your adversary should you need to heal. He is definitely a steep learning curve and he will teach you that you can’t be defensive in Bloodborne if you want to win, Gascoigne is going to make sure that you learn to be aggressive, forgetting everything that Dark Souls has taught you.

As a boss, I would rank Gascoigne quite highly as he is a very good boss with some intense law and he is an enjoyable fight. Thank you for reading, I will be back soon with another entry into the SoulsBorne boss series.