Posted on January 12, 2017 by Kayleigh Partleton Leave a comment

After having discussed my thoughts on the Dancer of the Boreal Valley and my fascination with her I have decided to turn that into a series of posts based around the bosses of not just Dark Souls 3 but the souls series as a whole, this includes Bloodborne. There are several bosses from Dark Souls 3 that I hold in high regards, the majority of Dark Souls 3 bosses dominate the top half of the bosses from the franchise as a whole therefore I will follow on from the Dancer with another boss that shares the same game as she does.

The whole point of Dark Souls 3 is that we the Ashen one have a duty, a duty to return all lords of cinder to their chairs in the firelink shrine so that the fire may be linked once more. There are 4 of these beings, The Abyss Watchers, Yhorm the giant, Aldrich the devourer of gods and the twin princes Lorian and Lothric. While the Abyss Watchers are my second favourite boss fight of this game, being the fight that I feel truly turns Dark Souls 3 into its true souls experience I’m not going to talk about them today instead we are going to discuss Aldrich, Devourer of gods. there is plenty of intrigue surrounding the saint of the deep, he brings a fair amount of curiosity out of me.

The reason that I want to discuss Aldrich first is simple, he was forced to become a lord of cinder by being locked up, this wasn’t done for his valour or virtue but it was done for his might instead thanks to all the men he had consumed. When consuming a man one can only assume that Aldrich consumed their soul also making him the perfect choice to link the flame. Aldrich hails from Irythll of the Boreal Valley, though he became a cleric he developed a taste for human flesh, he ate so many men that he bloated like a pig and softened into sludge as a result he was locked in the cathedral of the deep.

The Deacons are followers of Aldrich in fact they believe him to be their master, this is quite clearly shown by the fact that the Deacons of the deep are guarding the tomb of their master, the saint of the deep. We also find Deacons along the path to Anor Londo, they can also be found in Anor Londo itself with 3 of them waiting outside of their master’s boss room as he enjoys his meal. There is a lot more to discuss with the deacons but I will save that for another time. When we arrive at the cathedral of the deep we are expecting to find the saint of the deep, we don’t find Aldrich though we do discover that he has returned to his home in the Boreal Valley making this our next destination after our decimation of his followers.

One of the ArchDeacons known as Mcdonnel travelled with Aldrich going on to found a covenant dedicated to the Devourer of gods, The Aldrich Faithful. This covenant was dedicated to ensuring no one could reach Anor Londo so their master remained undisturbed, and this was with good reason. In the cathedral of Anor Londo Aldrich is in the process of devouring someone, this isn’t some ordinary man, no this is a god. Gwyndolin the son of the great lord Gwyn, is being devoured by Aldrich. Pontiff Sulyvhan locked up a member of the old royalty who we now know to be Gwyndolin, once we disturb this mass of sludge he assumes control of Gwyndolin giving him the use of not only what remains on Gwyndolin but the powerful sorceries and Darkmoon bow that he utilises. It is worth noting that Gwyndolin had fallen ill prior to be captured and devoured so fighting about likely wasn’t a viable option for this god. There is so much to discuss in regards to Gwyndolin but this is about Aldrich, Gods is plural this indicates that he may have devoured more than the one confirmed god. There is a theory that he has devoured Nito due to having the grave lord sword, for me personally I find this to be highly unlikely as we destroyed Nito in Dark Souls 1. 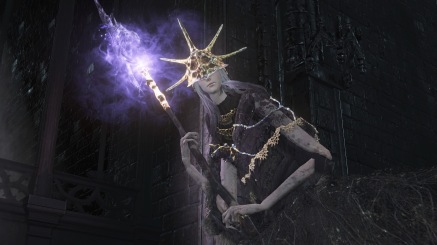 Aldrich also happens to have the use of the lifehunt scythe which he supposedly learned when he dreamed of the young pale girl in hiding but who is to say he didn’t track down Priscilla devouring her just as he has done to Gwyndolin.

Now that we have some background to the saint of the deep let’s discuss his boss fight. For me entering that boss room was in a strange way nostalgic as we are now facing Aldrich in the same room that we once faced Ornstein and Smough in, I felt that this was a nice touch by from software, the fact that we are fighting a lord of cinder in the process of devouring Gwyndolin when before we were fighting to meet his sister is ironic to me. We needed to defeat O+S to meet Gwynevere, she resided at the back of the cathedral, I just think it’s clever how everything has played out here.

As I have already stated Aldrich was able to use Gwyndolin as a puppet, he used the Dark moon bow to shoot a flurry of arrows our way as well as the soul spear sorcery. In a way I found this to be somewhat sad, think about it, this all powerful god was not only being devoured but his powers, his abilities were also being used against his will, honestly I do believe that Gwyndolin was still alive during this fight. My key reason for thinking this way is that upon defeating Aldrich we receive his soul, his soul is dark blue more than likely due to the effect that the deep has had on him. However if you pay close attention you can see a smaller golden soul inside of Aldrich’s darker one, this is probably Gwyndolins giving merit to the belief that he was still alive upon our arrival.

Back to the fight. I did struggle against Aldrich to begin with, the sorceries kept hitting their mark on me and they did deal a staggering amount of damage, the only problem with getting in close to hit him was the arrows that he could shoot at me, it would cause me to retreat, for if I didn’t I would surely die amongst the arrows. When you do get in close he disappears only to reappear on the other side of the room, giving us the challenge of avoiding sorceries and arrows to get in close again. His sword and lifehunt scythe didn’t give me much trouble at all I found those attacks to be predictable making them easy to dodge. Once I was in close I could deal huge amounts of damage, being close wasn’t ever a problem with this fight. Another thing that captures my attention during the fight is the state of the cathedral, its covered in what I can only assume is the sludge or left overs of Aldrich, not to mention all the bones that you can see throughout the room, it was a gorgeous room when we were last there but now it is a disgusting dark shell of what it was.

The sun is out, the afternoon is beautiful and...I am of course stuck at home 😂 thank god for games and movies!
Seriously missing Tsushima, may have to go back to my (dis)honourable Samurai ways
Happy Thursday! Approach me at your own risk ❤
It's Wednesday, this week is dragging and I want to go back to bed 🙃
Let my inner PlayStation fangirl out today 😁
April 12th can't come soon enough, I need a bloody hair cut!