Posted on January 8, 2017 by Kayleigh Partleton Leave a comment 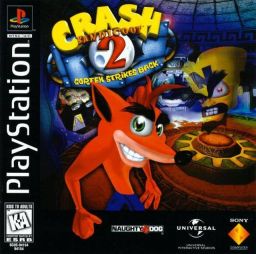 Let’s go back to 1997, the year Crash Bandicoot appeared on our PlayStations for the second time. Crash Bandicoot 2 Cortex Strikes Back was once again a platformer, with plenty of fun environments in which the levels took place, as the title suggests we were once again to fight Cortex, to prevent him from destroying the world through the collection of crystals once again. Before we begin I would like to take a moment to say well done to Naughty Dog, they created a sequel that not only did its predecessor justice but in some ways it actually improved upon the PlayStation classic.

Let’s begin with the characters since they are a huge part of what gives Crash 2 its wacky charm. We’ll get the obvious out of the way, Crash was as amazing as ever, his dance that he performed after getting a gem was simply amazing! One of the best celebratory dances I have ever seen in a video game, he was so proud of himself, good on you Crash cause getting those gems could be a real pain. I wonder if he did that dance when he met his younger sister CoCo, that’s right Crash Bandicoot became a big brother somewhere in that year between his games. CoCo Bandicoot was a welcomed addiction to the franchise, it was clear from the get go that she was intelligent, she could actually speak for a start, the beginning of the game was Crash going to find a battery for CoCos laptop, there was no doubt that she was going to prove to be an asset to her big brother. This sequel introduced a couple of my favourite ever characters, Polar, as the name suggests he is a polar bear cub and he is absolutely adorable seriously I want him! He was such a nice addition to the game due to the levels that you got to use him for, you get to ride Polar for a few levels including one that involves you being chased by a huge angry, scary Polar Bear. Polar also gives you roughly 10 lives if you keep jumping on his head in the warped room though he does look a little worse for wear.

Next is one of my favourite ever bosses from the whole of Crash Bandicoot, Tiny. Crash 2 is the very first time we see him, the fight itself was simple just jump around the platforms and wait for them to drop with Tiny on one, of course Tiny isn’t exactly a major character yet but since I am a fan on Tiny his first appearance for me is great none the less. While I am on the subject of bosses now might be the time to mention the Komodo Brothers who were created by Dr Nitrus Brio as this was their first appearance too and their only appearance as a pair really with cameos being spotted in following games these are only pictures found in different levels across the franchise. One of the brothers however is a boss in Crash Team Racing which I will come to in a later post as I cover all the Crash Bandicoot games, now the fighting the brothers was easy, seeing Komodo Dragons wielding daggers was imaginative though. Ripper Roo as ever was nuts! At the start of the fight we see him sitting behind as desk as if he is a professor….scary thought, he has also decided to grow blonde hair and moustache, looking good Roo looking good. As is the norm with Ripper Roo we have to use nitro carts to stun him followed by the spin attack, Ripper Roo you really should stay away from TNT and Nitro carts.  Cortex has a new lackey for this game since Dr Nitrus Brio doesn’t seem to be in agreement with him, instead Brio actually wants Crash to gather the gems so that he can destroy the Cortex Vortex, clearly the two doctors has a somewhat messy break up after the first game. The new sidekick to Cortex is Dr N Gin who happens to have a rocket lodged in his head, I guess that’s a good enough explanation as to why he’s insane. N Gin is a doctor that seems to love robotics, he is controlling a robot in the boss fight you have with him, finally it has given us another use for wumpa fruit besides getting lives from them, you have to throw the wumpa fruit at various parts of the robot to blow it up, yeah a robot got destroyed by fruit, I think you need to go back to the drawing board Doc. 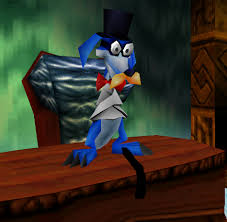 Cortex I will hand it to you, I mean you did act like the nice guy to Crash for most of the game you even fooled him for a while. Make no mistake though, you didn’t fool me and you most certainly didn’t fool CoCo, she was trying to warn Crash for most of the game finally getting the message through to him just before the end, that had to suck for you. Pretending to be nice to Crash well that had to be draining. It didn’t help that the final boss fight could be considered one of the easiest fights ever, being in space for the fight was innovative though. Maybe you should have been nicer to Brio, you still might not have won but the Cortex Vortex would still be standing, well floating.

Cortex Strikes Back featured some new innovative levels that were fun to play, there were some old favourites from the first game making a comeback such as being chased by a boulder, I loved Boulder Dash in Crash Bandicoot and I certainly love Crash Dash from this game, the rolling stones also made a return in various different levels throughout the game but lets talk about what was new in this game. So in the previous year we had a couple of levels where we were travelling upstream, now those were some fun levels, this game however introduced a jet board for part of the stream levels. That’s right you actually got to ride a jet board downstream, it was a fun addition it helped to keep the game fresh, to give the game its own innovative ideas rather than being a solid copy of the first game which was common place with platformers back in the 1990s. As I mentioned earlier we had the introduction of Polar, while we may have had 2 levels featuring us riding a hog in 1996 being able to ride Polar through the snowy ice filled environments was so much more entertaining, trying to avoid the penguins, orcas and giant Polar Bears was a more entertaining challenge, that’s not to say that I didn’t enjoy hog wild, rather that Crash 2 made the improvements it needed to make to live up to its previous title. 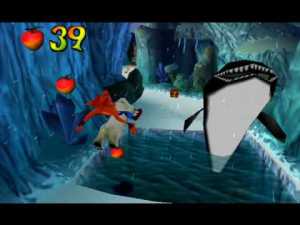 The secrets in this game were a lot more elusive, meaning it was more challenging to 100% the game, in order to collect every gem in the game you needed to get a certain spot in certain levels to be taken to a secret warp room that not only gave you access to secret levels but it actually gave you access to different areas within levels that you had already completed so that you could collect the coloured gem that is hidden, or hard to reach. I thought that this was a nice touch, the previous game did provide a reasonable challenge to 100% the game, I wouldn’t say it was easy to collect all the gems in Crash Bandicoot. Naughty Dog did up the ante in Cortex Strikes Back, if you wanted to 100% this game you needed to either be smart and somehow figure out where you needed to be, get lucky or quite simply use the internet, if I’m being honest my guess is that a lot of people used the internet to 100% finish this game.

This was 1997, it was a great year for Crash he became a big brother, he got an adorable pet, he defeated some pretty game competition and of course he foiled Cortex’s plans again. He even teamed up with Dr Nitrus Brio one of the main antagonists from 1996. Words cannot describe how excited I am to jump forward another year into 1998, Crash Bandicoot Warped is my favourite Bandicoot game, CoCo gets a pet, Cortex gets a mask and Crash gets to travel through time!